I have visited Austria on a few occasions. I was only 5 or 6 years old when I spent a week in Kitzbühel in the Tyrol region.
Other visits have been day trips, once to Salzburg taking the bus from Germany and on other occasions, wandering over it’s border with Slovenia. I returned for a ‘proper’ holiday in 2014. 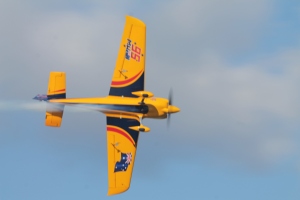 As a pilot, I love anything aviation which makes a great excuse for travel.
I have visited the Air and Space museum  in Washington DC and  decided the Air Show was a good reason for traveling to Singapore, however, most of my miles have been racked up watching the Red Bull Air Race.

I’ve followed the RBAR around many countries, including some places I’d never dream of going to otherwise, such as Detroit and Rotterdam.
In 2014, the RBAR was visiting Spielberg in Austria….cue another  holiday!

22nd October 2014
I arrived at Manchester airport after a long drive following an accident on M56 and checked in to the flight for Munich.
The earlier flight in to Manchester was late arriving which  probably explained our speedy one hour thirty flight time. Despite this quick flight, I had very little time in Munich before boarding the  Embraer e195 for the short flight to Vienna.  The weather here wasn’t great, rainy and a 25 knot wind gusting 45, luckily straight down runway rather than across!

At Vienna airport, it’s a short walk to the station for the CAT train in to the city centre.

My hotel Ruby Sofie, was  five minutes walk from station.  From the CAT station turn right to Marxergasse, the hotel is on the left after the Magic shop. 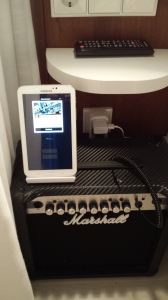 My room, 528, was an odd shape. There was a sink by door, a desk at end of corridor and the bed was round a corner. I think this odd design may be due to an emergency exit being behind my room. Not having another guest room next door meant I could put tunes through the provided Marshall amp at decent level (-:
Yes, an amp in the room to plug your phone/tablet in. You could even hire a guitar from reception! The hotel also provides a Samsung tablet  in the rooms. This contained hotel information, radio and some games.

The  bed was very comfy and the gap between the inner and outer windows made for a great fridge!
One strange design feature was the glass wall separating the bathroom from the main living area. Luckily I was travelling alone! 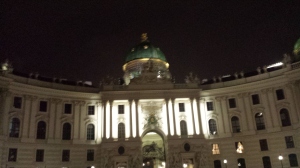 After unpacking, I took a walk around town. It was night time and very wet, not the best way to see a city but I managed to tick off St Stephen’s cathedral, the Imperial Palace and the Opera House.

Decided on a trashy meal from Spar which could be stretched out  for breakfast the next day (the hotel was room only.) I wasn’t going to be trudging round in the rain looking for a meal!

It would be unfair to comment much on Vienna,  I can only recommend the fantastic rail system and the hotel I stayed at. Just a few hours on a dark, wet October night is not the best way to see Vienna.

23rd October
I’d already booked my trains online and the journey was to be made on specific trains with reserved seats, always the best option when you have luggage to carry.
The first train got in late so it was a dash to find the platform, got there with seconds to spare.
I had window seat next to luggage rack and I was glad of this spot as the train soon got high in to the hills, offering some great views.
The Railjet train included a small cinema showing kid’s cartoons and each carriage had moving maps showing the time to the next stop, very useful when you don’t really know where you are.

We arrived in to Leoben just after mid day. It was a short walk from the town’s only station to the Falkensteiner hotel.
Luckily, despite my early arrival, the room was ready for me. The good sized Asian themed room had a balcony overlooking a park and river.
Like the other hotel, there was a window between the shower and bedroom this must be an Austrian thing!

As I mentioned earlier, the RBAR is a great way to visit towns and cities which would not otherwise be on the holiday radar.
Leoben is one such place, predominantly a University town and also the industrial centre of the area, but, for me, it was the ideal location, close enough to Spielberg to attend both race days (needless to say, closer towns got booked up quickly),  available  a good price and a few options for walks on the non-race days.

After a quick coffee from the room’s Tchibo pod machine, I walked round grounds then headed North, over the river following it down to Winkelfeld Strasse then East on Schiessstat Strasse, dropping down to cross the river at Pionierweg.  At the end of the road, near the Aldi, I walked  South towards Karntner Strasse, crossing over to continue South until the  road ended and the path into the woods began.
Initially I continued South to the first junction of paths. Here I went North then followed the path round to the West eventually reaching the remains of the 13th century castle at Massenburg,  The view point which offers great view of town and the large Gosser brewery.
I headed back down, zig zagging around town, ending up in Leoben City Shopping mall.
As with my other walks, the GPX file of this route is available to download

After a quick shower, I headed down to dinner. Normally, when I travel alone, I don’t like too much fuss at meal times but there weren’t too many options and to be fair, they didn’t turn a hair at me turning up in jeans and trainers and I wasn’t made to feel uneasy despite being the only lone diner in the room.
To give an idea of the quality of food; the starter was salmon mouse (cue Monty Python quotes) with corn relish and bean sprouts. Next up was curry foam soup.
Main course was turkey stroganoff with spätzle (a sort of small egg noodle) and leeks.
Dessert was semolina with sweet pesto and mixed fresh tropical fruit.
Nice and surprisingly filling but if that wasn’t enough there was also a bread and salad buffet.

The post meal walk was just around town, lots of other people seemed to have the same idea, wandering going nowhere. Not much around apart from student garage bar

Discovered that you only get two free pods for the coffee machine and I used both on the first day….
Ho hum stocked up on pop and bottles of water before heading off on a days walk.

Leaving the hotel, I went towards the train station then  South down Zetenschlag Strasse, continuing at the traffic light junction on to Mautgasse before taking a right on to  Kamtner Strasse.
After crossing the railway, it’s then a right on to Kerpey Strasse for about 100m where a left takes you on to Am Galgenberg. The footpath is on the left a short distance down this road heading South West. I followed the power lines to the junction with Rappoldweg, taking the left hand path.
Continue on this route at its junction with the nature path, passing a tiny church.

I kept on the path heading West, taking the right  near the group of buildings coming out of Neiderunweg then a left left headed West in to Schollinger.
I  stayed on the road as it turns to head North up to the junction where a left leads to  Tanzbergweg.
Turning right at the next junction,  I eventually reached St Peter Freinstrein passing through the village before taking a right near the fire station on Schulstrasse.
Near the railway line, head South on the footpath then continue on the roads parallel to the railway line towards the industrial area.

The steel works here apparently are Europe’s biggest producer of rails (as in train tracks)  I also passed a large area owned by Colas, presumably used for storage .Various items there including a  giant skull!
I left the roads, joining a path above the town cemetery before coming back on to Am Galgenberg then back through town to the hotel.

11 degrees. Some cloud but dry, that’s the main thing!
Afterwards, I went to the Aldi Hofer for some supplies. This shop is open at 7.40am (!) closing at 8pm, however it does not open on Sunday. An alternative shop is the Spar at  the train station is  open until  9pm every night incl Sundays and opens 6am..handy!

Early breakfast then took the 08.21 train to Knittelfeld.  This train goes up to St Michael then back on itself toward Knittelfeld.  €16.60 for return (in Oct 2014)

After leaving Knittelfeld station, I took the number 3 bus from just outside the station. Thankfully the driver kindly let me know when to get off on Triester Strasse, from there  was then a short walk North up Verbindungsweg to the Spielberg Red Bull Ring.

Lovely hot sunny weather. Better than most air races held in summer! Unfortunately, the Brits didn’t do well in today’s qualifiers, finishing quite far down the field.
The Austrian pilot, Hannes Arch had the  best run of the day.
There were various other activities as well as the Air Racing during the day both on the ground and in the skies.

Once the events had finished, I took bus 1 from  the road I left the bus earlier in the day. Only couple of minutes wait for the bus and just 7 mins to wait for the train to Leoben from platform 3 at 18.07

Decided to walk from Knittelfeld station rather than get the bus, this only took about 40 minutes. The gpx file for this 4 mile walk can be downloaded from ViewRanger 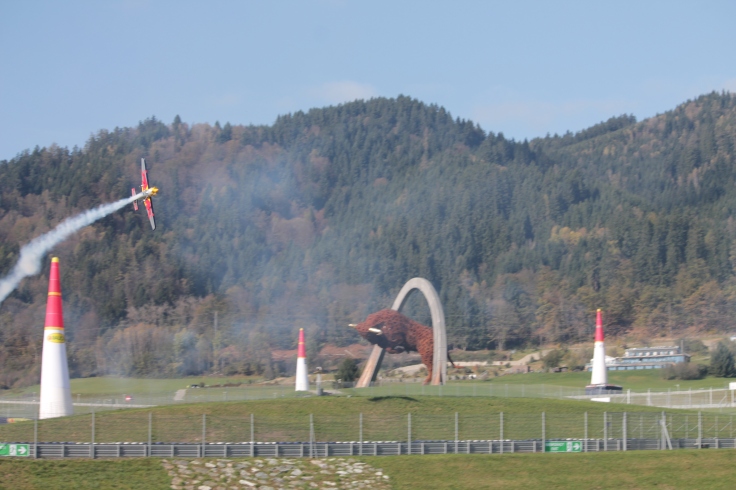 Bit of a wait for bus back but nowhere near as bad as could have been considering (if i read time table right) there are only a handful of buses per day.

Back to the hotel for dinner; starter of beef with toast and red horseradish followed by soup with strudel. Main course was beef goulash served with dumplings. The meal was finished off with apple tiramisu decorated with  physalis which seemed appear every where every meal!

27th October
Early start,up before 6. Unlike many hotels I’ve stayed at in the past, no problems getting an early breakfast, I got to the dining room a little before 6.30 but it was fully open.
Check out painless in fact despite being 7am,  three people on reception even at this early hour.

I arrived at the station for the 07.15 train to Bruck which did mean around 30 min for next train but better than rushing and missing it.
Someone was sitting on my reserved seat but found another easily and made myself comfy,  plugged my tablet in to the plug socket and made the most of the free wifi
It was a short walk to change for the s1 to Mitte then the modern Vienna CAT to airport.  Lots of room on this train with space for luggage although could check in at station.

Sadly there wasn’t much to do at the airport especially airside, so little infact everyone ready to board the aircraft long before boarding time so got off reasonably on time for the first flight in to Germany.
Wow, Frankfurt is a massive airport! Landed at Terminal A then faced a long walk to Terminal B.

So, in conclusion….a great holiday I would never have considered if it wasn’t for the Air Race.
Leoben isn’t a big tourist destination but there is enough for a few days here if you enjoy walking. The transport links mean it’s easy to get around and it’s reasonably well priced.
I wouldn’t be surprised if I returned for another Air Race in the future!