Sunday 13th March
This morning, I walked the 4 km to Santa Cruz for the  number 300 bus towards El Paso getting off at the Caldera de Taburiente visitors centre.  There are road signs to the visitor centre so it’s easy enough to spot in time to ring the bell.
This  journey cost €2.10* and, on the whole, La Palma has a decent bus service although some more remote villages only see a handful of buses each day and there are a lot less buses running at weekends.
There are just two fares €1.37* for short journeys and €2.10* for longer ones. The La Palma transport website (in Spanish) contains timetables and other useful information. One thing to note is all buses stop on the same side of the road (the side with the BP petrol station) There is a timetable for the Norte bus on a bus shelter on the opposite side but the bus does not actually stop here!

After getting off the bus, I took a quick look round the interesting visitor centre (and made a visit to their toilets!) The centre has been voted the number one attraction by TripAdvisor in 2016. Guides are available to provide information on the walking/cycling routes in the area. Another room contains a ‘mini museum’ of artifacts and information boards with information on the area, the flora and fauna.

Leaving the visitor centre, I followed the road West, taking the first road on the left, Calle Las Moraditas,  signed to the El Pilar refuge.
Initially, the path follows this road\track and, according to my map, it continued for some distance, however, the signs pointed me away from the road and on to a path meandering through woodland.  On the whole the path is well marked with  signs and pained yellow and white lines but, at one point where a track crosses left to right (flagged on the route),  the marker is hard to spot. The actual path is straight across but a quick detour on the left hand track offers some great views! 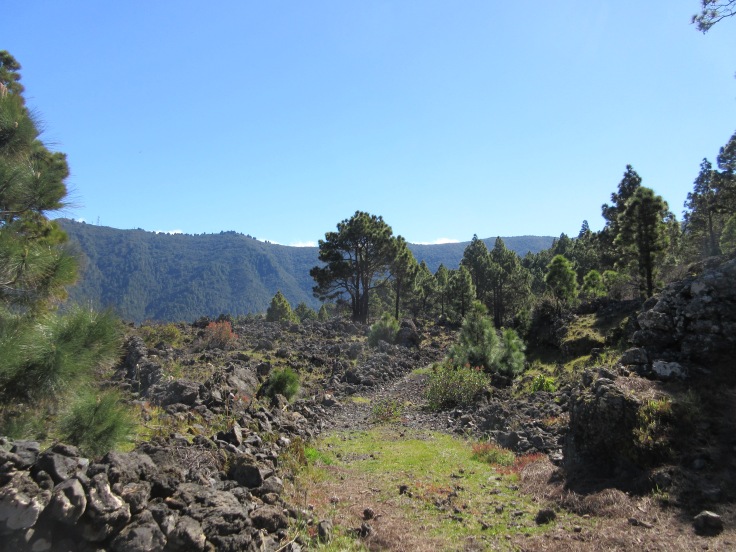 Returning to the correct path, I headed towards Montana Quemada then turned right at the track on to footpath 14.
The path starts at 2790 feet (850m) and reaches 4828 feet (1471.5m) so there is a lot of climbing, however, it is quite gradual over the distance of 5 miles/8km.  The terrain varies between woodland and baron, rocky volcanic paths. Keep a look out here for the local wildlife, it’s not difficult to spot lizards, buzzards and falcons.

The path crosses the LP-301 road a couple of times before reaching  El Pilar, a great place for a break. Situated in a pine forest,  a van serves all sorts of drinks, snacks and hot food. Cross over the road to find toilets and bbq areas.

Leaving El Pilar, I followed the road East for a few meters. turning off to the left to join path 18. From here it’s downhill all the way, dropping down through the clouds.
There are several routes back towards Los Cancajos/Santa Cruz. After leaving the woodland, I went through Las Ledas then straight down to Los Cancajos. All routes follow quiet roads and tracks after leaving the area around La Quebrada.

The GPX of this walk is available to download

Wednesday 16th March
After walking to Santa Cruz, I  took the 10:15 number 200 bus to Fuencaliente,  arriving at the the centre of Los Canarios just after 11:00.
This part of the island is a great place for wine lovers, there are a number of wine producers in this area, however, I was here for the volcanoes and salt. 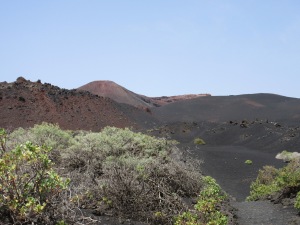 I headed West down Ctra. General, taking the first road on the left heading South towards the visitor centre.  Most walkers headed straight up the nearest volcano, San Antonio, sadly, time constraints meant it would be difficult to do a volcano and complete the rest of the planned walk.  Instead, I followed the GR131 path heading South West.  This almost scree like path headed down to a wider track which was also used by cyclists. One part follows a concrete path but, rather than continue on the GR route, I turned off on to the ash path along side the square reservoir (marked on my GPX route).
Again, many walkers take the popular route up the next Volcano, de Tenegula but I pressed on continuing downwards towards the Salinas at Faro. The route was rather baron, lots of volcanic rocks along the dusty, black path which I shared with several lizards.

Shortly after passing   Tenegula,  the salt pans and two lighthouses came in to view.

The original lighthouse opened in 1903. It was badly damaged by an earthquake in 1939, and had to be rebuilt. It is now a museum. The current tower, in traditional red and white stripes was built in 1985.
The ‘salinas’ themselves are vast. There is an interesting  self-guided walk around the Jardin de sal which produces around 500, 000 kg of sea salt every year by evaporation of the sea water in a series of pools.  This salt can be bought all around the island but is particularly cheap from the onsite shop.  The building also contains toilets, a restaurant and an upstairs bar upstairs is both cheap and offers great views from the terrace.  Work was underway to include  a spa area to the basement.
After picking up two packs salt for €4.50 each (almost half the price the airport charged), I made my way to the edge of the car park.  There is no bus stop sign, the  bus back up to Los Canarios just stops near the car park entrance buy only once  every two hours (hence not wanting to take too long going via volcanoes!) The journey costs €2.10. * and takes a route passing the Princess hotel. There was then around a twenty minute await for the hourly Santa Cruz bus. I got off at a stop before Santa Cruz  on LP2 by an over pass. At the stop, follow the road, under a bridge to a set of steps to the right. At the bottom, it is then a short walk (1.4km) following the one way  road to Los Cancajos, cutting out the stretch through the industrial area.

Thursday 17th March
After breakfast, I took a stroll around the beach area and quick look in the shopping centre before the short trip to the airport. ‘Shopping centre’ was pushing it a bit. One diving shop, sewing handicraft type shop, yoga \massage building and a medical centre. Some units were closed, one, a restaurant presumably would open later in the day but others appeared to be closed permanently with a few units up for sale.
It was another hour and sunny day. Many more people were down on the beach and in the sea, sadly, however, I was heading back home at 12.

Funnily enough my total mileage for the holiday was  not far off the  distance of the Dales Way but got far better weather, more unusual scenery and the trip cost a less money!