Tuesday 7th June
Ohh eggy bread for breakfast, been years since I last had that!  Put a couple of pieces on my plate along with bacon, omelette and, to complete the egg theme, scrambled eggs….a bit of protein overload!

The plan today was go around the lake as far as Miinska Cesta (by the supermarket) then take the first road on the right, Prežihova cesta, seeing  the small village of Mlino.
Shortly after leaving the village, the road becomes a gravel track heading in the direction of the Kozarca and Obroč hills.
The path follows the river round to join  Cesta Svobode, one of the roads leading from Bled,  passing the military area on the way (plenty of shooting today).
Following the Sava (river) Bohinjka  to the road, I  crossed over, taking a slight left  to join route 5 towards the church of St sv. Marjete and the pleasant village of Bohinjska Bela.
So far so good…..

I continued to the Slap Iglica  (Slap being the Slovenian word for waterfall). Initially there were a few tourist signposts but as I made my way around town, I struggled to find any other signs. I decided the most sensible option was to follow a stream to the west of the village then find my  way from the bottom of a dead end street.

A small group of climbers had gathered near the falls but no other walkers and to be honest I’m not surprised. Unfortunately,  I didn’t  really think it worth the effort.
I’m sure the 18 meter narrow falls are lovely at the right time of year but today, despite all the rain, it was a slight trickle.
There is a rather rickety set of steps up the side. I didn’t climb them but apparently  there are great views over the whole area.

The plan now was to head to Slamniki, a small settlement 872 meters above Bohinjska Bela.
Heading West out of town, Slamniki was marked on a sign post but, this was the only sign I saw and trying to follow the tracks marked on the GPS and map was not easy. I headed up hill with with the stream to the left, loosing and regaining not only the path but also my footing in the mud. I trudged continually uphill until the woodland cleared near some houses.
I could see a track  to my left but I could find it on my GPS or paper maps?
My GPS had one potential route; heading South East before rejoining the path I came up on. My paper map had a road heading East towards the Northern side of Bohinjska Bela. I didn’t want to investigate too much as there was a large group of people gathered outside one of the buildings. I didn’t trust my maps enough to go boldly striding towards them!

The GPS suggested only one route, paper map two.
I was getting confused and the more I tried to compare the two maps with the actual terrain, the more confused I became. I didn’t want to walk one particular route to find it took me miles off course.

I decided to take the ‘wimps way out’ and headed back the way I came. This is something I hate doing but, if I got back early, I could do another planned walk to Vintgar.
So, I turned 180 degrees and feeling rather deflated headed back. ….after taking  some photos of the view!

Once again, I made my way through the extremely muddy woodland. Maybe it was the ‘familiarity’ of Bohinjska Bela, but I started to got a spring in my step, I could find my way now even without a map and compass.

I  passed straight through Bohinska Bela, towards the church,  joining path 5 heading back the same way I came earlier.
Before reaching the road I noticed this brightly coloured  mobile bee hive.

Beekeeping is a traditional agricultural activity in Slovenia. In the past, when sugar was in short supply, almost every farm kept bees.  Virtually all hives  are painted,  many with intricate designs. These are mobile hives are used to move bee colonies between pastures.

After crossing  the road, I took the first road on the left rather than continuing around Obroc.  This road led to Lake Bled were I walked anticlockwise round to the hotel for a wash,  drink and plot the rest of the day.

Sadly I wouldn’t recommend the full 11 mile walk, however, I have added the route to Bohinjska Bela on ViewRanger as a GPX file.

It was 14.30 and I’d only walked 11 miles  so time for another walk this time in the opposite direction to Vintgar gorge.
The best way to the gorge is along the road heading North  East from Bled to Podhom. I followed Partizanska cesta crossing a bridge before  a fork in a road where I took a left up Cesta v Vintgar. I remained on this road, passing under a railway bridge before entering the village of Podhom whose name means ‘below Hom hill’.
There are plenty of signs through the town directing both walkers and vehicles to the gorge. The route is easy, just keep following the road until it crosses the Radovna river. Shortly after passing Gostilna Vintgar you’ll see the car park and then the entrance.
Entry is €4 at time of writing * and is paid at a small hut, there is one on both sides of the gorge. Each entrance to the gorgealso has a small snack bar, seating and toilets.

The route follows a wooden walk ways  which can get narrow especially as it’s two-way.  The views are spectacular and I assume there were especially good today  following the large amount of rain that had fallen in the area recently.
The route passes pools and rapids  and at the end is the 13 m (43 ft) Slap Šum  (which translates as ‘noisy falls’). This is the largest river waterfall in Slovenia.
I walked down the steps past the pay booth and through the woods to the viewing area which is a great place to see this powerful waterfall.


I returned to the booth/snack bar to take the path back through the woods toward Sv Katarina church. Just ahead of  me in the woods was a man dressed in a t-shirt, cargo pants and trainers. His only nod to being in the great outdoors was a Craghopper hat. He had no map and stood in the middle of the woods looking confused.
“Is this the right way?” He asks, surely that depended on where he was going.
I told him to follow the red and white markers painted on the trees. He was wondering what they were for!
At the end of the woods  is the chuch, a restaurant (Pizzerija Jurček )and some beautiful views.I took a short break on one of the wooden benches to take in the vista. 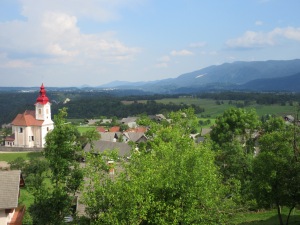 Heading in to the pretty village of Zasip with its distinctive red roofed church, a lady with presumably her husband calls out a cheerful ‘Dobrodensdki’ .
‘Dober Dan’ I reply almost exhausting my Slovenian vocabulary.
‘Dober dan’ they  both say,  beaming.
If only every village in the world was so welcoming!

Wandering through the Zasip I paused to watch a game of boules taking place outside Gostilna Kurej. The sun was shining and, despite the navigation issues in the morning, this had turned in to another good day!
Continuing on the road out of of the village, I soon reached the fork in the road and bridge where this circular walk to Vintgar started.

Some travel companies offer this trip for around €14 per person. Save €10 and do the trip independently. It’s fairly easy walking and far more rewarding! A copy of this walk is available in GPX format.

I retired to my room after a dinner  and sat on the balcony as the entire town plunged in to darkness for few minutes, the only lighting coming from the emergency lighting from various hotels. Never found out what  caused this, it was one of the few nights we hadn’t had sorms.

One thought on “Chasing Waterfalls”