Friday 10th June
Well, that time has come, the final day. I had pondered a few different activities during the week. Cycling was a possibility along with a few more adventurous ideas but the week was spent walking. This choice was partly down to the unpredictable weather but mostly down to the ‘100 mile challenge’ put before me by work colleagues and today I was just a few miles off completion.

After breakfast  I wandered back up to my room to fill the rucksack. The weather forecast was good but I didn’t trust it so in went the waterproof jacket and (extremely muddy) waterproof over-trousers along with sunglasses and travel towel. All bases covered!
I’d left my boots on the balcony and they were still wet after yesterday’s 24 hours of rain. Hopefully I’d get some sun to enable them to dry of a little.

I could have started the day in a hectic fashion to get the 8.20 bus to Bohinj, instead I decided to go for the more leisurely 9.20.
I left the hotel and crossed to the bus station opposite.  The tickets are bought from the driver costing €3.60*  for a single adult journey. Make sure you ask for and get off at Bohinj jezzero (lake) rather than the town of  Bohinjska Bistrica  6.5km/4 miles up the road. ‘Bohinj’ itself is the valley or basin.

As the bus pulled in to a stop in the outskirts of Bled, we were passed by a man wearing what is best described as wheely skis, I suppose you have to practice cross-country skiing somehow during the summer months! 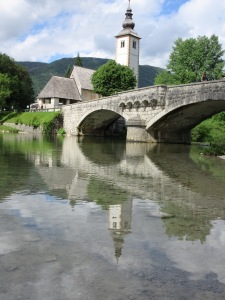 I left the bus at Ribčev Laz, a village to the East of the lake side of the lake and  the most recognisable part of the area as it features in all the tourist information for the area.
The bridge at the end of the lake does get busy with people getting the perfect photos but it’s not difficult to see why, it really is a picture postcard view!

I started my walk by crossing the bridge, towards the church of Sv Jenez then following the road up to Stara Fuzina. The Bohinj International Ironworks festival was taking place in the top end of the village which seemed to be popular with the local school kids.

I crossed over the bridge to the North of the village then took a left following the river Mostnica to Hudičev most, The Devil’s Bridge.  The bridge was built in the 18th century to improve the supply of iron ore from the surrounding mountains to the iron ore plant.
Legend says that the people of Bohinj built a bridge before nightfall, but by the morning it had been destroyed so decided the Devil  should build the bridge for them (as you do). In exchange for building it, the Devil demanded the first soul that crossed it.
When the bridge had been completed, a peasant threw a bone to the other side for his dog, therefore, the Devil received the dog’s soul and was a bit miffed. In his anger he thrashed his tail  bringing down the fence but the bridge still stands.

After crossing the river I took a right and continued North, eventually reaching a pay booth for the Mostnica Gorge.
It cost me €2.50* to enter the gorge but it was well worth it. Personally, I think this gorge is on par with the more popular Vintgar Gorge near Bled. It’s a pleasant walk through the woods and it’s easy to leave the path and take a closer look a the picturesque gorge.

At the end of the gorge, I crossed the bridge then joined the road up towards the Planinska koča na Vojah mountain hut. 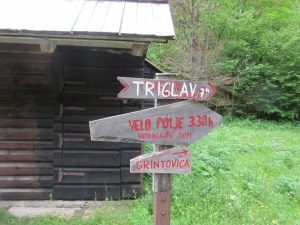 Navigation wise, this  be the easiest walk of the trip as it was so well signposted.
Bohinj caters for walkers far better than Bled having so many more well marked routes.
The signs also give a fairly accurate idea of how long it takes to reach the chosen destination.

The plan now was to go and see the Slap Mostnica, the 21 meter high waterfall at the end of the valley.

I continued, past the mountain hut to a fork in the road. Both directions head to the waterfall. I chose the left hand fork. This turned out to be a very good decision!

I didn’t see a single person as I made my towards the waterfall, keeping the river to my right. Once I arrived there it was clear that the ‘Health and Safety Rule Book’ went out of the window! No handrails or barriers, you’re free to wander where you like to get the best views. 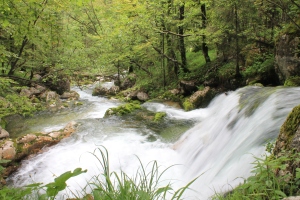 After taking some photos and video footage, I sat for a while near a smaller waterfall slightly downstream the main falls. The sun was out, the views were amazing and I felt I was the only person around for miles.

Eventually I worked my way back to the path  South, crossed the river  and headed back towards Stara Fužina. As I left the woods to join the main track, I passed a group of walkers heading towards the waterfall. I walked past a few more people heading the opposite way as I continued. I had obviously gone at the right time and gone the right way around the circuit!

Once I got back to Stara Fužina it was too early to get the bus back. It was my last day and I was going to make the most of it!
I  took a right out of Stara Fužina to the lake. My plan was to go part way round and see how I was for time.

While it doesn’t have a pretty church on an island or a castle over looking it, Bohinj is as beautiful as Bled, perhaps in some ways, more so. It’s less touristy and the imposing mountains make a fantastic backdrop.  I was aware I had to get back for the bus, but couldn’t resist lots of stops to take photos….lots of photos!

The path around this lake is far more rugged than the route around Bled. At one point, it crosses over some rocks but nothing too difficult if you take time and care. 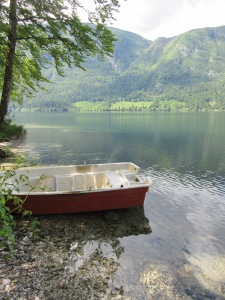 Although the route on one side of the lake through woodland, the path on the other side is predominantly tarmac where I could make up some time.
I reached Ukanc, a small village at the far side of the lake containing mostly holiday accommodation.
A sign by the, now closed, hotel Zlatarog claimed it would take me 1 hour 15 minutes to reach Ribčev Laz. It was 15:30, my bus was at 16:50. I had to get wriggle on!
I managed to make it back to Ribčev Laz. at 16:15. Enough time to sit by the waters edge for a while!

There were a lot of people milling around near the bus stop and I assumed the bus would be full but no, all the English had taken an organised tour bus tour  from Bled to Ribčev Laz.  They paid had €32 per person for a half day trip, I paid €7.20 (two single bus tickets)* I also had the bonus of arriving and leaving when I wanted!

The bus arrived dead on time and dropped off at the bus station right outside my hotel, the Jelovica

The last evening meal of the holiday started with kulen, a tasty salami style sausage. There is some debate as to whether this is a Slovenian or Croatian sausage, either way, it’s very good!

Needless to say, as it wasn’t raining, I needed my final evening passeggiata and this was going to be a memorable one! 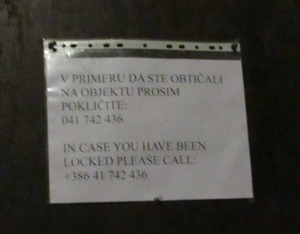 I left the hotel and took a left up Graska Cesta then the next left, climbing up to the castle.
The sun had set over Bled as I freely entered through the castle walls. Although the castle itself was closed, the grounds were still open and if the worst came to the worst, a telephone number was pinned to the back of the castle gates so I would be able to get out!
I sat on my own on one of the walls looking out across the town and lake  – a great way to end the holiday!
This 2.7 mile/4.3km route is available as a GPX file.

Epilogue
So, in conclusion, my seventh trip to Slovenia didn’t disappoint!
When I first came to Slovenia I travelled to Bohinj on my last day and I clearly remember walking back to the bus stop wishing I could stay.  I vowed to return and I did….several times!
This occasion was no different.  The weather wasn’t great and some of the walks didn’t go to plan but I still loved every minute and travelling back to the airport,  I started planning holiday number eight!
While it was lovely seeing Bled again, I don’t think it has as much to offer walkers as other areas such as Bohinj, Kranjska Gora or Bovec. Yes there are walking routes, fantastic scenery and plenty of establishments offering all sorts of activities but I think be another trip to Bohinj will be next…watch this space!