I was swearing at my Satnav.
There was several gig worth of unused SD card sitting in the slot but it refused to use it and refused to accept the car park I’d selected on my laptop route planner.
I muttered to myself as I scrolled through the settings on the satnav and typed in the ridiculously long Welsh road name. There were three potential car parks, the one I wanted, one quite close to the one I wanted and one quite a distance away. The latter was easier to enter in to the satnav as it sat in the middle of a distinctive junction.
Press the screen. Navigate to here. Sorted.

I headed down the same familiar route, down the A55 towards Conwy, however, I experienced my first drive through the centre of town and on to the parking spot in the hills just off Sychnant Pass Road.
The weather was lovely as I got out the car, perused the walking route and left the car park. It was about a mile to the car park I planned to start the walk from. In retrospect it would have been easy to find if I’d have persevered driving down the road. Oh well, hindsight and all that.

When I reached the third car park, just past a large country house, I crossed to the left hand side of the road, walked through the gate posts and on to the footpath.
The path was very easy to follow and plenty of signs along the way ensured I was heading in the right direction, South (ish) initially.
The views over the bay towards Anglesey and Puffin Island were beautiful.
As usual in this part of the world, there’s always plenty of sheep but I also had a bit of a Rolling Stones moment passing several wild Carneddau horses. 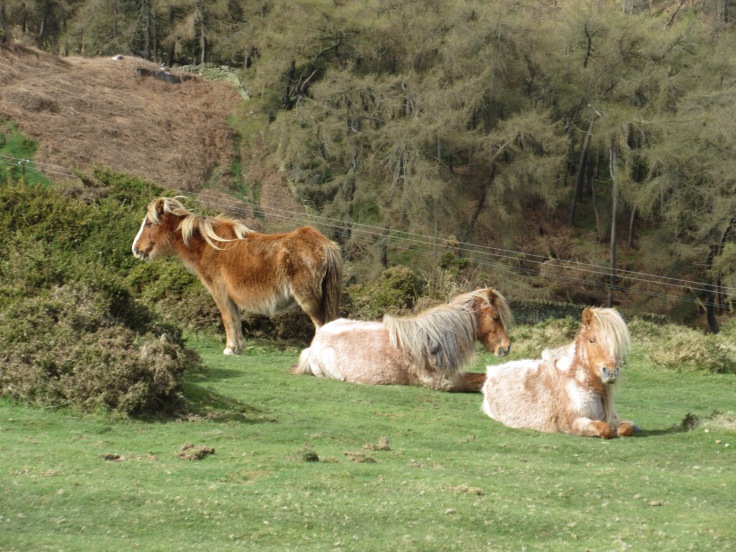 The path changed direction, crossing a stream to my right before hitting a crossroads where a number of paths joined. I took the path to my left.
The map below may provide some useful inspiration for other walks in the future!

As I stopped to take a swig from my water bottle I began to wonder if I should change my route as I was not parked where I’d planned the walks started and ended. I dug out the map and decided to take the next (and only) path to my left. This should eventually bring my out right at the car park I was using.
Unlike the paths previously, this  was not signed and not easy to follow. It was difficult to stay on the right path  across the wet, muddy terrain. I knew I wanted to be heading South East so using a combination of GPS and compass, I headed in roughly the right direction.
At one point the ground dropped away steeply to a stream below, but despite a jiggle to take the less steep slope, I stayed  on course and it wasn’t too long before I’d rejoined a more obvious path.

Again, the views were great and I saw a great opportunity to get the Jetboil out for a coffee break. I’ve marked the point with a beer glass on my downloadable route (well, it’s the best icon I could find!)

After my brew,  I continued to Craigyfedwen and on towards the road where I’d left the car, however, rather than head straight back, I looped around Crow’s Nest Hall and Farm, meeting a couple of llamas along the way.
All in all and enjoyable 8 mile walk with some great views…..I even forgave the satnav….but how do you move content to the SD card….hmmmmm….

A week later, another Monday off work and another walk.
Again, I was planning to try somewhere new.  I had two ideas, both were in North Wales, one 40 minutes drive, the other 70 minutes away.
Looking at the weather forecast, rain was due to hit the furthest location at around 3 pm, the closer location would be dry all day, so, a 40 minute drive it was!
I’d driven through the village of  Trelawnyd on my way to Dyserth on previous walks so no swearing at the satnav today!
I left the car in the free car park near the church at the centre of the village.  I changed in to my boots and walked back to the main road, crossed over and down the one way road opposite.
This soon became slightly muddy path through field, the theme for the day.
Initially I was following the North Wales Pilgrims Way, a   130 mile route which links ancient churches dedicated to  saints of the 6th century.  I had followed  part of this route on the walk 30 miles down the road the week before.

As I wandered through farm land towards I started to sense I was being followed.
One sheep initially, then two, three…
….eventually there were about 20 sheep extremely close to me,  following me across the field bleating very loudly.
It was  like a scene from ‘The Walking Dead’…..if ‘The Walking Dead’ featured zombie sheep.

At Graig Arthur, I left my woolly tormentors and headed South towards Glanllyn.
Here, I joined the Offas Dyke path, following a road.
The path left the road to the right, passing through a hedge and over  more fields towards Marian Cwm.

I remained on the very easy to follow Offas Dyke path until I reached a junction at Marian Mill Farm.
Here I took a right and found a great spot to pick some wild garlic.
It’s quite easy to spot with it’s wide green leaves, however, you will smell it before you see it!

I love this stuff, it makes a particularly good pesto when whizzed up with olive oil and Parmesan cheese
It’s a shame the growing season is quite short. It is really worth tracking some down in the Spring months.
After filling my now rather garlicy rucksack,  I continued to Cwm Road (stop sniggering!)  then back to the main road then over to the car park It was still early afternoon, I still hadn’t made a coffee and I still had a lot of energy left so I passed the car park and went on the path up Gop Hill.
The views from the peak were pleasant. I found a decent, sheltered spot to get the Jetboil going and make a cuppa.

Two very nice walks, but,  if I’m honest, I preferred the first and suspect I will be back around there very soon.

As usual, this 8 mile route  and the Conwy route are both available as downloadable GPX files on Viewranger.