Getting out in the countryside

I started the day on the Subway, red line number 2 to Brooklyn.
It’s worth pointing out then when entering station, check it doesn’t specify which lines/directions it serves, some entrances are for just the one line and once you swipe your ticket you have to wait 10 mins or so before you can use it again.  I had a 7 day pass so it’s not an problem, however I suspect it may be an issue if you’ve paid for a single journey.  Incidentally the 7 day unlimited pass for around $32 (plus initial $1 for the new card) is well worth getting.
I’d already mastered finding my way around on the Subway, it’s easy to use and trains are frequent. Unfortunately, however, they can become very, very crowded and there are some ‘interesting’ people on board at times.

I got off the train at Hoyt Street and wandered down the shopping street, on to Brooklyn Bridge road and Pearl Street towards the park on the water front. The path along the waters edge offers great views over to Manhattan’s distinctive sky line.
I continued to Pier 5 and decided I had to make a return trip one evening.
I moved inland and took a wander around Brooklyn, finding a couple of potential places for evening meals. Tonight though, dinner was taken at Da Gennaro in Little Italy. A real tourist trap, the restaurants here are not cheap! The carpaccio starter and lobster ravioli were extremely good though.

After breakfast, walked towards the Yankee stadium and the Yankees-E. 153rd Street train station.
I paid the $5.50 train fare and waited on the platform along with a few others for the Croton Harmon train. It was due at the same time as a train going the other direction towards Grand Central so I didn’t think anything of it when a train came in. on the other platform. I then noticed other passengers running up the stairs.
I’ve no idea what became of the Grand Central train but the one to Croton had been moved onto the other platform. I quickly ran up the stairs and over the bridge. As I boarded the train a man in front of me shook his head, “they’re always doing this” he sighed.
The train journey was pleasant and I was surprised how quickly we left the city.
Getting off the train at Croton I wandered through the streets in the pleasant leafy suburb. I’d left behind the apartment blocks and was now walking past family homes with kid’s toys lying in well-kept gardens.
Leaving the road at Truesdale Drive, I dropped down to the Silver Lake beach on the Croton River and on through the woods. I felt a million miles away from New York City.
I crossed the river at the Quaker Bridge and, after taking a left, joined the Old Croton Aqueduct trail. This is a pleasant, easy to follow, wide trail through woodland, opening out at the New Croton Dam. The views went on for miles, it was very difficult to imagine this was so close to New York City.

It was back on roads again for a short while before re-joining paths near Colabaugh Pond. It was here I met friendly chap collecting logs. He mentioned the local wildlife to look out for which included beavers and coyotes. The best I managed to spot was chipmunks.
I was now heading for the Briarcliff Peekskill Trailway, another well marked route through woodland. At least it was well marked until I reached Watch Hill Road.  After taking a left, the route disappeared. According to the map on Viewranger, I should head up Mountain Side Trail.
Looking at my GPS, I  was right on track but no path and no blue blobs. I cross checked with Google map, yes this was where the path should be but no sign of it, just over grown woodland and people’s back gardens. 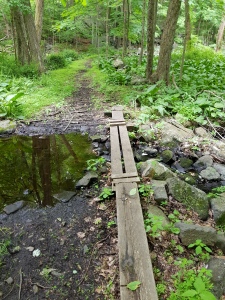 I ended up passing between two houses and working my way up to where the path should be. I was very glad of my GPS at this point!
Once I found the path, it was, once again, easy to navigate, just following the now yellow blobs.
The route made its way around dense woodland. I eventually left the woods by Woodside Elementary school. From here it was a fairly straight walk along roads to Peekskill station.

Surprisingly, the return journey was $12.75, twice the cost of the train to Croton despite being only a stop or two down the line. I can’t complain though, it was a reasonable distance and provided me with one of my most enjoyable days of the holiday. The route can be downloaded as a GPX file.

Back in the city, dinner was taken at the Amsterdam Burger Co, unbeknownst to me, I was in the Jewish area and this small eatery only served kosher dishes. I only realised when I noticed one of the ingredients was written as “bacon” the quotes added as it was beef bacon.
I started with chilli loaded nachos then an Aussie burger, basically a beef burger with beetroot. Not sure if that is how they take their burgers in Australia but nice if a little on the expensive side, $18 for a burger with no sides.

2 thoughts on “Getting out in the countryside”